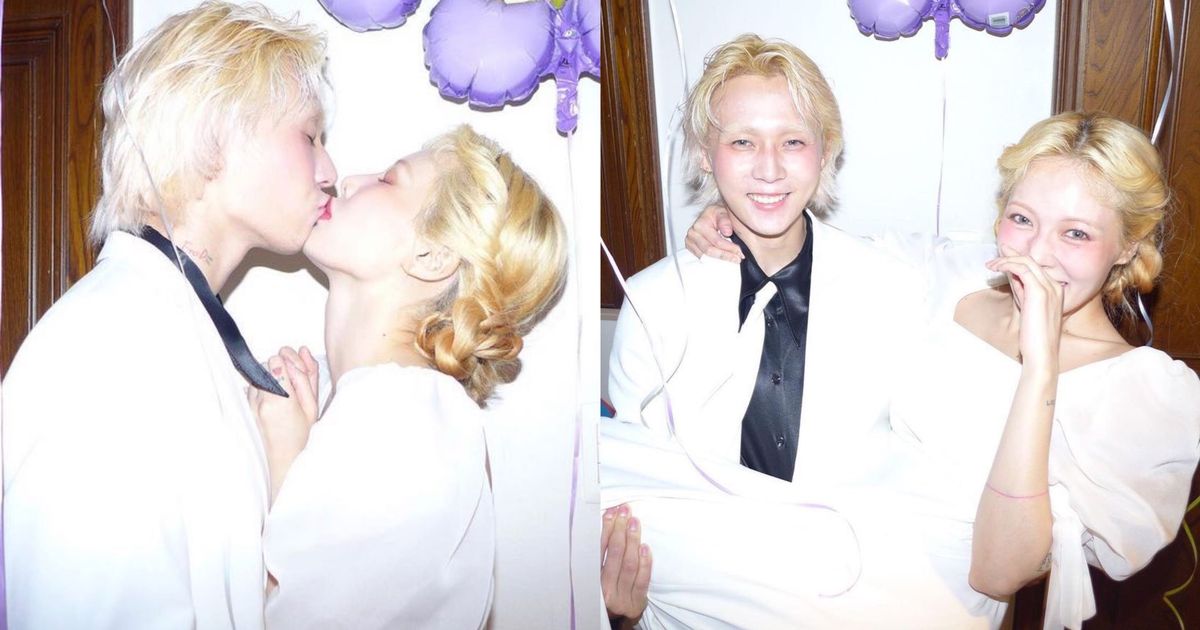 Fans celebrate as the kpop couple that once got banished for dating, Hyuna & Dawn are now proudly engaged after six years of dating.

Looking back at their Dating Journey

Hyuna and Dawn first started dating each other secretly, back in May 2016. However, they ultimately decided to make their relationship official in August 2018 after multiple dating speculations.

The couple released a statement that read:

“We know that (our relationship) will stick with us but we both thought it would be difficult to see our fans on stage (if we didn’t announce it). So we wanted to honestly tell our fans who have loved us and showed us their support, and present ourselves confidently and joyfully on stage.”

While Hyuna detailed heir journey in her statement saying;

“I got to know E’Dawn when he was a trainee and since becoming friends after performing together, we began dating in May 2016. We began dating after working on our music together. We were very cautious about our relationship. Our decision to open up about our relationship was to be honest in front of those who support us. And I want to show our best on stage so that we can take responsibility for our decision.”

Dawn expressed his side of the story in his statement that read;

“Although it’s a little different from the reality, I felt the need to admit the fact in order to be happy. I felt bad and told my members beforehand in case it would affect our team. I am very sorry towards our fans as well but I’ll make certain that I repay our fans by working very hard”.

Post going public about their relationship, both Hyuna and Dawn suffered severe backlash. Dawn was sent on an indefinite hiatus from PENTAGON’s activities and several events and appearances of Hyuna were canceled. At last in September 2018, Cube Entertainment announced its decision to end the couple’s contracts. The agency issued a statement reading;

“Hello, this is Cube Entertainment.

It has been decided that Cube Entertainment artists HyunA and E’Dawn will withdraw from the company.

We put our number one priority in managing our artists with mutual trust and faith between the agency and the artist.

After much discussion and consideration, we have decided that we could not regain the trust of the two artists, HyunA and E’Dawn.

We would like to thank the fans who have supported the two artists up until now.”

Unlike professional artists, Hyuna and Dawn too learned about their termination of the contract with CUBE Entertainment along with their fans via media. An insider told that even the couple were totally unaware of the company’s decision and were shocked upon learning it from the media.

Post leaving CUBE Entertainment, Hyuna turned her Instagram into Lovestagram, sharing pictures of her boyfriend on her Instagram handle. Little did they know this was just the beginning of the brighter days ahead for the couple.

They kicked off 2019 with an official couple photoshoot with MAPS, followed by signing contract with Gangam Style fame PSY’s agency PNATION

PSY personally announced the news by taking it to his Instagram handle where he shared a ‘WELCOME’ post for the couple.

Post joining PNATION, HyunA and DAWN have been working on their separate solo projects as well as collaborations and couples’ CFs. Under PNATION, HyunA made her comeback with “Flower Shower” and DAWN made his solo debut with “MONEY” in 2019. HyunA and DAWN became the first public idol couple to ever perform on national television and at an end-of-the-year ceremony on December 31st, 2019.

In 2021, their fans were convinced that HyunA and DAWN had gotten married in secret when the couple shared an affectionate, all-white photoshoot that looked just like a wedding shoot. Eventually, it turned out to be Hyuna’s 30th birthday celebration.

And they got Engaged !

On February 3, 2022, DAWN shared an Instagram Story of him and HyunA wearing matching rings and captioned it, “MARRY ME?”

Hyuna re-shared the smiliar matching ring video and captioned it;

Both Hyuna and Dawn’s fans are escalated to celebrate the engagement of the power couple.

We wish them a happy life ahead together. Congratulations Hyuna and Dawn!

Share your best wishes for the lovely couple in the comments section below.